Today was a pretty full day on the car front, it started with me taking the Land Rover to college which was nice I do like it sooo much more than the Audi. I saw today an Aston Martin V8 vantage on Far Gosford street today in Cov, clearly the owner is mad because no one in there right mind would park an expensive car in Cov let alone on Far Gosford street (another reason why I take the Audi!). The Aston was also parked outside a music shop which I thought was funny because who wants music when you have an Aston Martin? 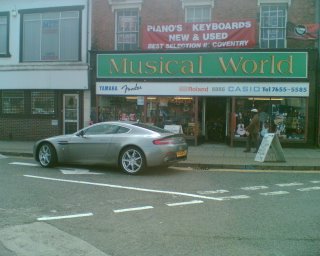 This though was nothing compared to later events! On the way to my house Luke had a spot of bother and unfortunately wrote of his vehicle. He is excellent despite rolling his car into a hedge, no injuries what so ever. And you'll be surprised to know it wasn't a speed related accident, just an unfortunate instinctive reaction.
These are the results... 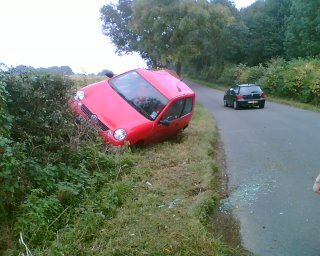 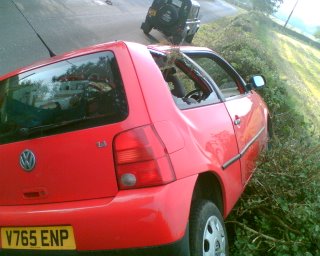 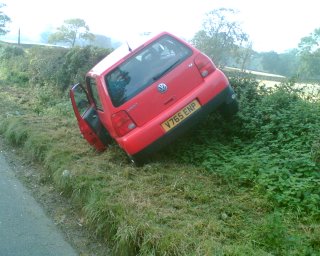 These pictures were clearly taken before it exploded into a ball of flames and me and Luke saved the life of an old woman taking her grand children (whose lives we also saved) out for a walk! True storey!
I then engaged the low range on the 'drover and pulled luke's car out it was an awesome recovery my second so far! Dad then drove it back to our house (just round the corner), it was a little bit worse for wear and the max seed was about 25mph.
When Dad turned up to help me do the recovery and with him brought his new purchase, a shagged 1972 Alfa Romeo GT 1600 junior (for parts and panels for the 2.0 GTV). So the Beaumont household managed to acquire 2 unroadworthy cars in one day, bonus!
Unfortunately I missed Fifth Gear all but Tif in the Gallardo, not that fussed really it was probably the only good bit.
Posted by William Beaumont at 1:36 PM No comments:

In the depressing months between the Top Gear series Fifth Gear used to keep me happy enough. Not now though, the new layout in some red-neck, greasy spoon cafe (no that's not mean to be café) doesn't help the program and they have hired a new presenter who is the most pointless man ever. His response to Vicky Butler-Henderson's (who was regaining a bit of dignity after her terriblee Top Gear days, until now) question about whether he thought the new Bentley Azure was too much of a footballers car couldn't have been worse in my mind. He went on about how he loved anything that footballers did/wore/owned, this kind of attitude is what has tipped GQ over the edge (now a shite magazine for people who want people to think they are rich), his freedom of speech rights should be taken away, better still his voice box with a blunt implement. Tif is the only good thing about that program, his escapadess in the Williams Renault Clio and new Clio 197 were fantastically entertaining but this still isn't enough to redeem it. As for the other presenters Tom Ford should stick to writing in Top Gear so we don't have to look at him and I couldn't bear to watch all of it so i don't know if Jason Plato is still on it, I hope not after he was so arrogant in the last series.
So what do you do to satisfy your car viewing needs. Get on youtube! Rarely have I been as excited as I was when I found out there were this many car videos on one website. There are videos for any car you can think, of I even found MGB videos, who would want to film one of them? Its even got Tif in the Clios from Monday night on there, this one is great if you can stand the wanker presenter appearing before and after the main bit. Most of the best bits from Top Gear are on there, all of the challenges and tours, so to get your Hammond fix get on those ones (i know watching a video of him won't make him get better more quickly but it sure does make you feel better.)
So you don't have to go trailing through the whole of you tube I have comprised a top 5 best car videos on youtube(in no real order.)

Part of The Hire series BMW commissioned it has fantastic driving, directing and just enough humour to almost make you like Madonna.

Rene Arnoux and Gilles Villeneuve proving that Formula 1 was never as boring as it is now.

There are many more top gear videos so I had to chose one, so one with a Lotus and an Apache seemed to make sense.

The Japanese, you gotta love 'em!

P.S.
Saw this on my day off Mercedes 600 (not quite a Pullman though.) 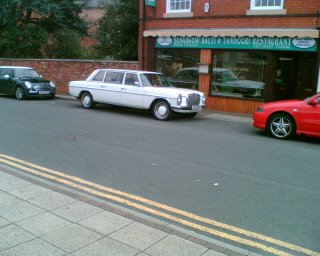 How much do you want one of them!
Posted by William Beaumont at 1:42 PM No comments: