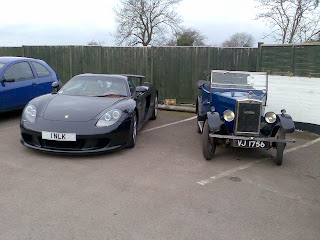 Some thing a bit more exotic for you this time! By the way these two cars are only acceptable together, it's a contrast thing you will not look cool in either on their own. Unless you have had the Morris Minor from new (this theory doesn't work with the Porsche, although these are the most acceptable of the new Porsches.)
Posted by William Beaumont at 4:15 PM 1 comment:

I haven't been out much this weekend so I have decided to look back into some of my unused photos on my computer and pick out a good 'un. 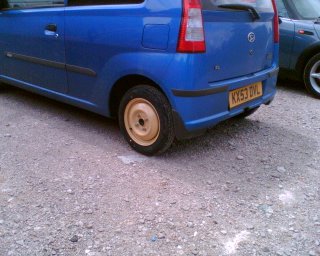 This Daihatsu Charade is made even worse by having the thinnest wheel ever conceived by man attached to it. If I had to drive this vehicle and then more unfortunately got a puncture in it and had only that to put on it to replace it, I think I would have chosen to walk, probably making it to my destination on time but just a little more out of breath. I didn't think anyone's embarrassment level could withstand this but the woman who drives this so called vehicle has a drooped, ginger, afro how attractive!
Posted by William Beaumont at 10:19 AM 1 comment:

Again the next positve car I have to put up is an 80's monster, a bit more of a classic though! 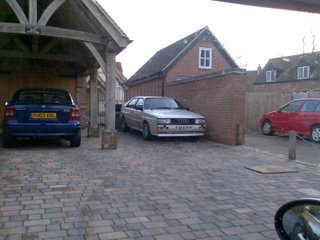 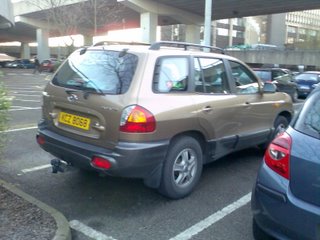 Just remember some one had to go to the effort of getting to a Hyundai dealership after deciding they liked the Santa Fe. Then when choosing what colour wanted they would do the impossible and make the situation even worse by getting that colour.
Sorry that the picture is a little blurred, I think I might have been shaking in pure disgust.
Posted by William Beaumont at 9:50 AM 1 comment:

Been as my blog is probably the most boring blog on the Internet I am going to try and "spice things up a bit!"
I am going to take a picture of a car everyday that I think is worth my effort to put on here. Some of the cars will be examples of good cars and others won't. It’ll be a bit like vice's "dos and don’ts" but with an automotive twist! Sounds exciting I know.

So to start things off with a bang, I have for you this beaut! 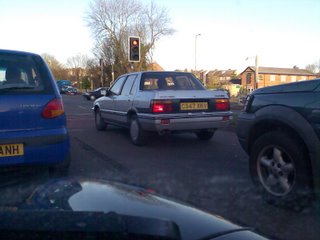 A Rover 216, probably not the most exotic car but still quite rare these days. Would you have one of these or a Montego?
Posted by William Beaumont at 9:43 AM 1 comment:

I know I promised I would blog more and I haven’t. I am though for filing one of the things I said I would do and that is blog the Beaumont household’s new car (the one that replaces the Audi). So do your best to enjoy this.

We had to first of all decide between us what car we would buy, Dad didn’t want anything too small because he thinks there are dangerous, Mum wanted something slow and economical and Jack and I wanted a Mini. So like Mr Redmond told us in graphics: children have the buying power and we opted for a new Mini.
That was just the start really. Now the price we/Dad settled on meant that any of the minis would be possible but with variations in age and mileage. Fortunately there are only four main derivatives of Mini's; The Mini One (looked like the most promising because of insurance), the Mini One Diesel (although its more economical, slow and a lower insurance group we thankfully didn’t even consider it) the Mini Cooper (our second option) and the Mini Cooper S (initially our first choice but no one would insure me unless it was third party only so that was ruled out.) So we wanted Air Con, and it had to be Black, Silver or British Racing Green. We didn’t want the seats with the swirly "aqua" pattern on or them in red! We made the mistake of not having a black or grey interior in the Audi (it was blue!) and we wont be doing that again. We also didn’t want the faux Lamborghini/Alfa wheels made from holes! So after being quite specific about the car we wanted we tried searching for one on the autotrader. We have used the autotrader enough to like it, most of the second hand cars we have bought have been on there and we may have sold one or two on there too (our buying and selling ratios don’t quite match each other we seem to accumulate cars like most people do dust). So the website seemed good because we could be quite specific but still our search turned up over more than 200 cars. So the long and painful task of selecting a car began.

For three weeks we scoured the pages filtering out and cars with dodgy colours, accessories, wheels, interiors or modifications. Every one that looked promising was either sold or the number was wrong.
We eventually found one that was promising and was reasonably close, Stratford upon Avon (an extremely nice market town). So dad and me went to view the car. When we got there the lady who was selling it (who also turned out to be extremely nice) was selling it for her daughter (the producer of Channel 4 shows such as Wife Swap and Its Me or the Dog). She began to try and sell us this vehicle doing the worse attempt I could ever imagine. She told us all bout her life and ended up revealing that she may have had about (according to my estimations) £3million worth of assets. Then she told us how much a dealer had offered her, £1000 less that her asking price (as usual for dealers far too low but people will pay not to have to do the leg work themselves) a bad move for her, us now knowing she will accept pretty much anything above that. We had decided that the car was right for us so we/Dad entered into negotiations. We decided that splitting the difference between her asking price and the dealer’s offer was about right, to which her response was "whatever!" So we thought we ‘d knock off another £100 off for us. So we settled that there and then dad and me popped to the bank and got a bankers draft sorted the insurance and I drove away in it an hour after the deal had been confirmed! What a bonus!

It was not as clean as me and dad would have expected been as someone was trying to sell it so I spent yesterday giving it a Beaumont clean. And while I was at it I gave the Defender a going over (not half a much effort need been as I was the last one to clean it!) And in true blogger styli I took some photos (mine being shite because of my lack of talent and I was using my phone. But I gave it ago; they’re also a little bit clichéd, sozzard.) 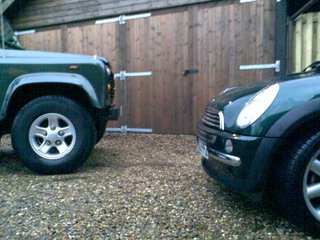 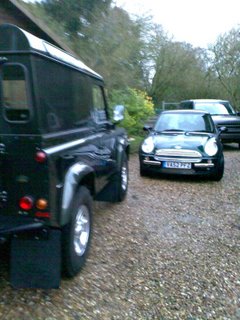 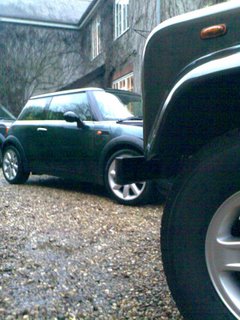 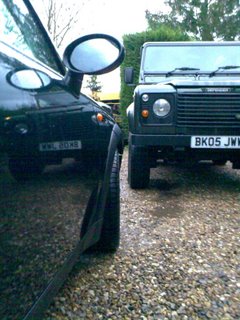 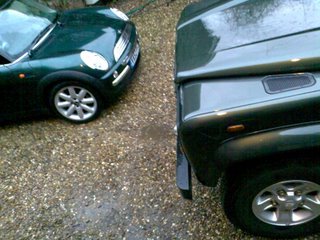 Posted by William Beaumont at 9:06 AM 2 comments: