Why I Hate.. Nissan Figaro

I haven't posted for a while I know and I will update you soon. I think I will do a BIG post all about my car when it is done (it will be done by the end of the month, we have set that as our deadline.)

So back to the topic, the Nissan Figaro. Well it wasn't at the top of the list to 'Why I Hate...' but my dear friend Lara and I were driving around when we spotted one. Lara went all high pitched and squealed about how cute it was.

I then said it was 'Shit!'
She said 'Why?'
I said 'Because it is'
'But its cuuuuuuuute'
'Yes but its a Micra in school girl drag!'

So the conversation went a bit like that, more or less. The Figaro then; a small, Japanese, convertible similar to the Daihatsu Copen and Suzuki Cappuccino. So there it is the first thing wrong with it: it fits into the same catagoery as those. All of them are too small and too slow, they are barely cars. They are the car version of a Mini-Moto: they look similar to a car just smaller and if a full size human was to drive them they would look ludicrus. Have you ever wondered why they are all convertibles? Its so you can actually fit in.

These cars came about when the Japanese wanted to recreate the small European sports car from the '50s to the '80s like the Austin Healey (Frog-eyed) Sprite, Lotus Elan, Fiat X19, Alfa Romeo Giulietta Spider. All of these are brilliant cars even though they weren't very powerful they were light and lots of fun. There was the odd exception obviously and unsurprisingly it came from MG with the Midget. So it is understandable why a manufacturer would want to recreate the good ones. Mazda was successful with its MX5 (I don't want one but lots of other people do and the press does rave about them) but as is the Japanese way they wanted to make them smaller. So small in fact we have this breed of extremely small cars with extremely small engines. The essence of the older cars was that they were light, that is what made them fun but with modern 'necessities' and safety equipment their weedy little engines just about propel these cars forward. I am clearly not the only person who thinks that they had lost their edge, Nissan did too. They thought they could do better by styling there cars like they were from the past. I am all for retro styling even some of the most gaudy ones, the new Mini. The Mini was saved by its quality and performance the Nissan Figaro has no saving graces. No that is a lie, the colours that they were painted are good. So many people recreate and old look with the shape but often paint them with metallic, pearlescent paint and that's wussing out at the last minute. Nissan went the whole hog, actually it went a bit too far. The Figaro is not so much a retro design as a bad, old one stretched over a Micra with an extra dollop cute that came out of the same place as Furbies do. 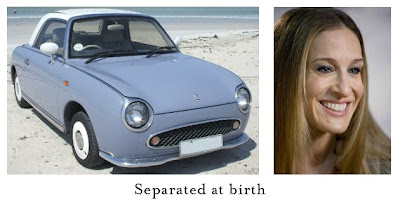 I think the Figaro is a bit like Sarah Jessica Parker. Girls love it. Boys hate it. Its ugly. Dressed in a stupid outfit. Small. Looks older than it is. Its nose/front looks a little out of proportion. Associated with a fairly dull program (Sex and the City)/manufacturer (Nissan) but with one exciting feisty thing (Kim Cattrall/ GT-R) keeping it from falling into the abyss where you might find Hyundai and Joey.

I don't think I have been anywhere near as offensive about this car as I should be and SJP seems to have come out the worst so far but someone didn't make SJP (unless you believe in God then he gets full blame) so she can be forgiven. She can also be commended for becoming so successful despite her drawbacks. The Nissan Figaro on the other hand wasn't really that successful in any right (unless you count the success of being able to move Vanessa Felts [she owns/owned one] and that is quite an achievement). There is someone to blame for the Nissan Figaro but we shouldn't mock because he must be blind, that is the only excuse.

Fans of the Figaro can click here for a site that you may well find appealing, beware this is evidence that Comic Sans lends itself well to writing about the Figaro.
Posted by William Beaumont at 2:42 PM 9 comments: